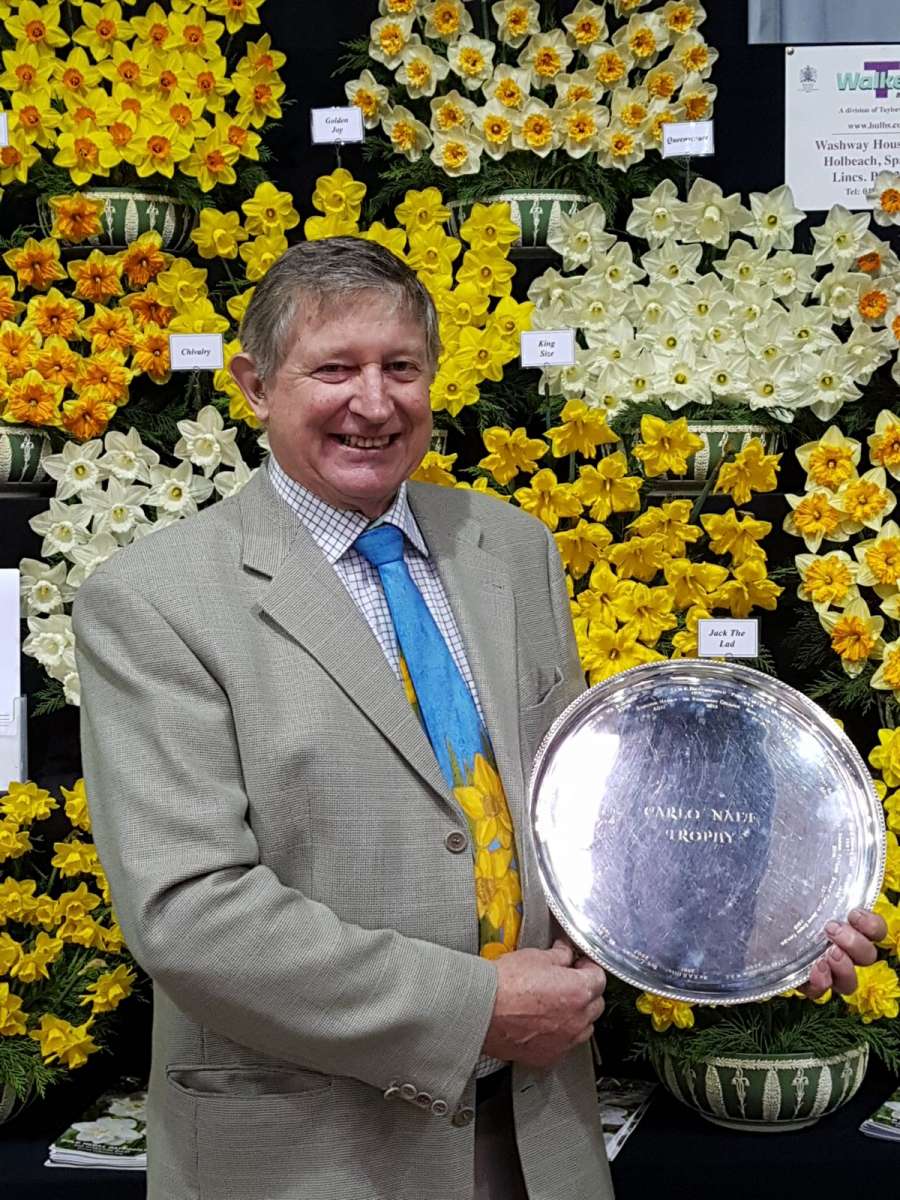 In 1992, the Covent Garden based flower importing company, J. & E. Page, gifted a silver salver to Springfields Horticultural Society as part of their celebrations to mark the 90th birthday of their chairman, Carlo Naef. Since then the Carlo Naef Trophy has been awarded by the Trustees of the Society as a mark of recognition and appreciation of the work carried out by the recipient for the UK flower bulb industry.

David Norton, Chief Executive of Springfields Horticultural Society said “John started work with Geest Industries back in 1965 as a trainee bulb buyer. During his 20 years with the company he worked in many roles within the Horticultural Division before becoming Commercial Director of Geest UK with responsibility for all the bulb and horticultural crops grown in Lincolnshire and Cornwall. In 1985 he joined another local bulb company, O. A. Taylor & Sons which is based in Holbeach, near Spalding and is one of the UK’s leading suppliers of flower bulbs to garden centres, high street retailers and landscapers. He was initially responsible for the production and sales of all prepacked bulbs and in 1990 was appointed to his current role as Commercial Director, which combined bulb buying with his production and sales responsibilities”.

Mr Taylor’s extensive career experience in the flower bulb industry meant that he was also well respected for his technical and practical knowledge of bulb and flower production and he represented the industry on many committees including the Nuclear Stock Association Committee; the ADAS Kirton Advisory Committee; the NFU’s Central Horticultural Committee and the HDC Bulb Committee. More locally, in the aptly named “South Holland” area of Lincolnshire (around Spalding) he had roles with the NFU South Holland Horticultural Association and the Spalding Flower Parade Committee.

He also took a personal and more broader interest in local business and social issues by representing on committees such as the South Holland Police Consultative Group (dealing with community policing); the NFU Employment & Education Committee (AWB rates and Gang-Master regulations) and the NFU South Holland Proficiency Test Committee (testing protocols for tractor driving and farm skills). In 1992 he became a Trustee of the charity Springfields Horticultural Society which manages the UK bulb industry’s show gardens and flower bulb “shop-window” in Spalding, which benefitted from a multi-million pound development in 2003/4 and became Springfields Outlet Shopping & Festival Gardens, a visitor destination which now attracts over two million visitors a year.

David Norton added “John has always been a dedicated supporter of the flower bulb industry and those who work within it, and it is therefore justly fitting that he should receive this recognition from the industry that he has supported all his life, an award that his colleagues and associates would like him to accept as a sincere “thank-you” for his efforts on their behalf and as a sign of their appreciation of his considerable achievements”.

The award was presented by Mr Peter Ruysen, Chairman of Springfields Horticultural Society on behalf of the Trustees of the Society and bulb industry friends and colleagues at the Lincolnshire Daffodil Society Spring Flower Show on 14th April 2018.